“Eunice is to apple pie what Michelangelo is to the Sistine Chapel,” Rob called out one Sunday morning during the “Joys & Concerns” part of church. And the congregation voiced its approval with chuckles and murmurs, applause and Amen. Eunice’s baking skills were well known. She was the secret weapon of the United Methodist Women’s Bake Sale year after year. But Eunice was also known for her goodness and her faith, her smile and gentle humor. Everyone loved her because she loved everyone. Even her cat sent flowers to the funeral—a lovely arrangement, large with big tiger lilies and pink and white carnations.

There were lots of flowers and a steady flow of visitors paying their respects. In all the years that anyone has known her, they’ve never heard Eunice say an unkind thing or an unkind word about anyone. And that’s a great way to live if you want to make friends. Or follow Jesus. Eunice didn’t just go to church—she lived the church. She was what Christians should be; in fact it’s what we would be, if we were living like Christians. Eunice faced the future unafraid, and I am sure that’s how she died because Eunice had two great loves in her life: God and her husband, The Colonel. And they are all together now, and it is grand beyond imagining. It has to be. If Eunice can’t get into heaven—there’s no hope for the rest of us. 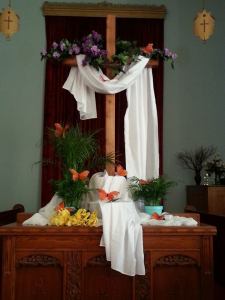 One thought on “Eunice”